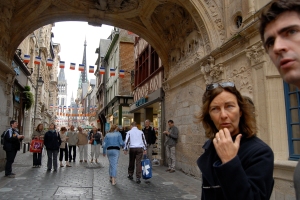 Being in France, particularly Rouen, again was weird. C’etait chez moi et pas chez moi; j’etais la mais j’etais entre deux mondes. I walked the same streets and saw the same people… at least a few of them… and spoke French as was my wont, but it had to be short-lived because Scott was there and he doesn’t understand French. I spoke French to him anyway, and took him by bus to where we were staying with Christine, because of course I remembered the way, and I remembered the stops on the way, and the three years it had been were a small thing. Yet not so small, because I was a visitor, clearly. How do you visit your home, or what was once your home? How do you explain: this distance was nothing before; I walked it all the time, and it was normal? How do you explain: je suis different en francais, et tu ne peux pas le comprendre. Je suis moi quand meme, toujours, mais c’est un moi que tu ne connais pas?