Hierarchy can kill people. Take the case of Korean Air, which suffered a high rate of crashes until the airline was re-structured so that the crew was required to address each other informally, in English. What had happened was that the planes had quite literally crashed and burned because inferiors were too polite to do anything but hint to the obviously-fallible superior that perhaps his decisions were wrong. This was documented in Malcolm Gladwell’s Outliers, which I gave my father for Christmas.

My father recently remarked on this particular chapter that “Without thinking about it, that’s how I ran my Emergency Room.” Often, doctors make decisions based on statistics, on medical history and the patient, but doctors are also surrounded by nurses and other staff members who, while supposedly subordinate to the physician, may know something or think of something the physician hasn’t considered. Dad ran a fairly egalitarian ship. He said this gave him peace of mind, and the nurses, naturally, appreciated it. “There were doctors they didn’t like, and eventually, I figured out that these were the doctors who were hierarchical.” Nurses tend to spend more time with patients than the doctors do, at least in the hospital, and sometimes, the tidbit of information that could make all the difference has escaped the doctor’s attention. Not treating nurses like subordinates can save your patients’ lives in some cases.

Not treating one gender as subordinate can save lives as well. Gender hierarchy can result in mass infanticide of the less-favored gender, as in the case of China and India. Both of these countries score fairly high on the power distance index, meaning they embrace hierarchy and the idea that some people are lower in the order of things than others. Both countries also support the idea that, within the family structure, the male is more socially valuable than the female. In India, females are a potential financial burden, since the family must provide a dowry for her. In theory, this is her insurance against disaster; the dowry is in place to help provide for her if something happens to her husband, for example, since she is not necessarily expected to be able to provide for herself. In practice, however, this promotes female abandonment and kitchen fires. This is not in any way to say that Indian daughters are not loved by their parents. Many are. But many are also left by the wayside in the search for the all-important boy, particularly if the family’s resources are strained by overpopulation or poverty.

Many African and Middle Eastern countries with high power distance scores, correlationally or not, practice female genital mutilation, which can among other things result in death. FGM is a complex topic, of course, but it stems from the idea that women should not be like men, and that women need to be untainted by inappropriate sexual desire. Again, many families who inflict this practice on their daughters sincerely love them. They want the best for them. They want to protect the women from evil influence and elevate their status in their local communities. Interestingly, the practice appears to be slightly less common in countries within the region where women must be accompanied by male relatives when they are out in public — though this may essentially infantize them in the name of safety and propriety, and financially cripple them if male relatives cannot provide.

Before you blame these practices on some religion or culture that you do not espouse rather than on the social order per se, ask yourself — if you are hierarchical — how far you would go to ensure your daughter, sister, fiancée or wife remained sexually and spiritually pure. Do you believe, for example, in the curse of Eve, and consequential suffering in childbirth? If so, why not suffering in every part of the reproduction process? Especially if you could thereby protect your loved ones from the depths of hell, since sexual purity is probably more closely tied to salvation than other sins like pride or slander that you’re personally guilty of every day, and True Love Waits just doesn’t work that well? Doesn’t the Bible say that if your eye offends you, you should pluck it out, for it is better that one part perish than that the whole body perishes in fiery torment? Doesn’t the Bible say that women are weaker vessels, and isn’t it your duty to protect weaker things, even from themselves?

And if, now that you have considered these points, the question of circumcising women is still met with anything short of “No Way,” aren’t you in fact blaspheming the God who created them exactly the way they were born, in his own image? 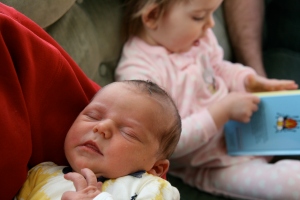 The second of my nieces is five days old today, and I am thankful that she is coming into a world where she will not be mutilated for being a girl. Where she will have the opportunity of a good education, the opportunity of independence. Where she will know she is loved as a person, as much as any brother she will ever have. I hope she, along with her sister, realizes how strong she can be, how fierce and how protective, and I hope she never accepts the words of those who would tell her otherwise.

I heard from many sources growing up that I was weaker because I was a girl — though never from my parents. Girls, people said, were prone to make overly emotional decisions about things and were physically weak, which was why gender hierarchy was important. Ironically, I was one of the most self-disciplined children you probably would have ever met, and I had a methodical, pragmatic way of approaching things, eschewing candy and saving every dollar I earned for some future importance, which turned out to be college. Since then, I have worked with many men and many women, both in blue-collar and professional atmospheres, and it least in my experience, contrary to everything I heard about “feminists” growing up, it has been the men who were more prone to verbal outbursts, grumbling and manipulative behavior than the women.

Physically, of course, I am much smaller than the average male, but the things I did as a child, the ballet and the gymnastics and whatever else, helped to make me reasonably coordinated — to the point that it’s actually rude of me to expect that men will be as good as I am at physical things just because they’re men. I went snowboarding with a 28-year-old male recently, and excitedly took him to do things that I had judged easy. He’d only been a few times, but I thought, he’s a wrestler-turned-Marine-turned outdoor enthusiast with abs of steel; this won’t be challenging for him. It’s not all that challenging for me, though I’m not that good yet either. However, he found it frustrating enough that it was less than fun for him, and it was sort of a disappointing afternoon for both of us.

Let’s be clear here: Many males (and females) outdo me without breaking a sweat. Others don’t, though. Frankly, I could meet the male’s minimum physical requirements for getting into the aforementioned Marines. Which is why I think the armed forces having different standards for men and women is silly — I work out pretty much never, unless you count what I do for fun. Now, granted, there is no way I could throw a 200-pound soldier over my shoulder and carry him to safety, but for better or worse those aren’t in the requirements for Marines. My snowboarding pal, on the other hand, would meet any such standard you could throw at him, but even so, he isn’t guaranteed physical dominance in every realm, even going head-to-head with a 118-pound 30-year-old female with a desk job — and he would readily admit this. Which is why any man or woman who claims otherwise seems either ignorant, or like they’re part of some self-fulfilling prophecy where women never do anything active.

What does this have to do with females being circumcised and strangled? For one, the idea that they will be less adept, and more of a liability. The idea that they will not be strong in a way that is culturally acceptable. The idea that they should never have anything that swings between their legs — metaphorically, physiologically. And hence, everything that is naturally female — the shapes they are born with, their bold, bear-like motherhood, their intuition or grace or aesthetic sense, their ability to endure, their ability to sit still and learn — is pushed into oblivion in the name of making them less like men. And, yes, a tent of cloth looks less like a naked man than a naked woman does, but the natural differences are still distinct enough that very few people would find them confusing.

4 thoughts on “Gender hierarchy: For a new baby girl”