Glendale won 35-21 after a close game this past Saturday between two of the nation’s leading rugby teams. Despite winning the last season, the Colorado-based Raptors had suspected that they would have their work cut out for them in playing the Washington-based opposition on its own turf, and, indeed, they were tied at the beginning of the second half.

When I say “its own turf,” I don’t mean that completely literally. There aren’t many rugby stadiums in the United States. In fact, there’s just one, and it’s Glendale’s. Glendale, by the way, is set to become one of a few US professional rugby teams in 2013, boasts current US team members on its roster, and is currently ranked #1 in the nation among Division 1 club teams. But that’s not really why I care about Glendale. I care about Glendale because my brother Sam Botkin plays for them. This weekend, I was watching him play at the semi-pro level for the first time, alongside players who had been on national teams all over the world. 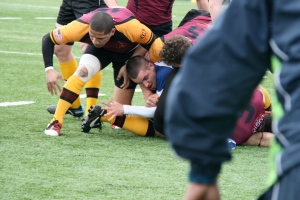 He was — no surprise — ferocious. Within minutes of the game starting, in fact, his face was covered in blood. His lip got mangled in a tussle for the ball; ground up into hamburger. He checked to make sure his teeth were still intact, and kept playing, until the ref made him go wipe off his face.

“I hope you didn’t have any modeling contracts,” one of his teammates joked, looking at the blackened, swollen mass.

“Actually…” Sam trailed off. He’d submitted some photos to an agency, which had gotten him a couple of interviews. No actual modeling jobs yet, but it was a start. I thought, in any case, now his lower lip will match his upper lip. Back when he was three, he’d been chasing eight-year-old me around the yard (not the other way around) and I jumped up on the deck to avoid him. He attempted to follow suit, and crashed into the edge face-first, splitting his lip. That one has had an excess of testosterone since he was an infant. 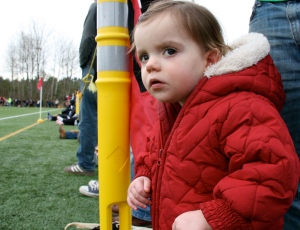 Which is probably why he was back in the game fairly quickly. By this point, my sister, brother-in-law and two nieces had shown up. Chloe, who is 20 months old, positioned herself on the sidelines where she could follow Sam’s every move. Chloe loves her uncle, and she also really likes rugby. To the point that she’ll climb up on Sam’s lap, find his iPhone, and ask “uh’bee?” bouncing and nodding until he pulls up a video and hands it to her. She will watch the uniformed men tearing up and down the field, and at the end, will often ask “more?” Her first live match held her interest enough that if you asked her where her uncle was, in the melee of white and blue stripes swirling across the green, she would point. Accurately. At least until the junk food appeared. 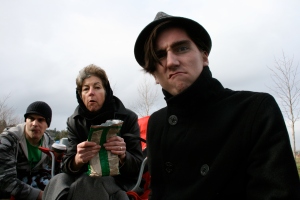 Meanwhile, the rest of my family was looking cold and somewhat hungry.

After Glendale emerged victorious, we celebrated by heading back to our hotel in the University District, towing Sam with us, bloodstains and all. While Sam was in the shower, we — my brother-in-law, boyfriend, friend and I — realized that we had 15 minutes before happy hour ended at a local brewery, and decided to run the several blocks, texting Sam on the way to let him know where we were going. We ordered with three minutes to spare, getting Sam an oatmeal stout. Sam arrived shortly thereafter, in a double-breasted jacket, looking about as suave as one can with dried blood plastered over one’s lip. He drank his beverage out of the left side of his mouth, pronouncing it tasty enough to be worth the sting. 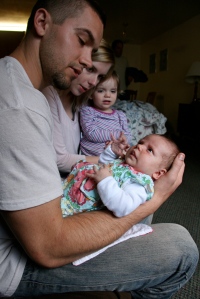 Afterwards, we ate dinner together, cooked in our hotel’s kitchenette, and Sam held his newest niece.

Then we did something that I do not remember ever having done before: we went to a bar with my parents. The Raptors were congregating at a spot a few miles away, and Sam wanted to join them. Apparently, most of them were leaving as we arrived, which meant the volume settled to a dull roar and allowed us to talk. One of Sam’s teammates introduced himself — as Butters. I asked if this was a reference to South Park, wondering what this African-American from New Orleans had in common with the sweet, naive blond kid from the cartoon. “Naw,” he said “I’m slippery. Tough to tackle.” He sat down with us, shared a pitcher, and told us how much he loved rugby. “I would be a different person if it wasn’t for this sport,” he said “I’ve met a lot of good people. I’ve traveled.” He put his mug down and proposed that we play a drinking game. We played one round, and my mom lost.

The next day, we said goodbye to Sam, and drove back to Idaho.