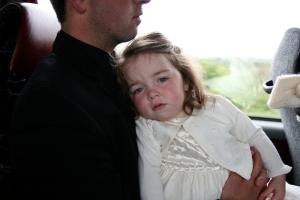 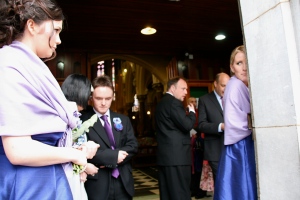 One of the most surreal things about traveling is finding people displaced into a new context, as, in this case, happened shortly after I arrived at Barabrow and people started trickling in for the wedding of Thomas and Emma, which was my whole reason for being there in the first place. Most of these people I had never met, although I knew them by reputation or sight or last name. So I spent the evening sitting outside, in my down jacket, talking to people who live about an hour away from my hometown, as they ate and drank and laughed together 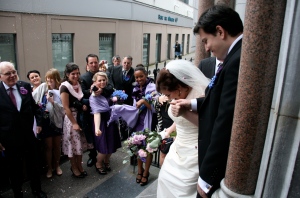 The next morning, I asked Thomas, the soon-to-be groom, who was calmly partaking of his full Irish breakfast in the center of a small crowd of guests, whether it was normal for an Irish wedding celebration to extend to either side of the wedding so extensively. He said sort of. Emily, meanwhile, was upstairs getting ready. A few hours later, she emerged. Naturally, it had started to rain.

The rest of us from Barnabrow, including most of the bridesmaids and the flower girl, walked down to a waiting bus, which apparently could not make it up the driveway, and which apparently had been booked by Thomas to ease the to-and-fro. We the rode the half-hour to Cork, where the wedding would take place.

The bus driver stopped and told us to walk down an alley, and we would find Saints Peter and Paul’s Church, a neo-Gothic structure built in 1786.

I’m not sure if I was technically supposed to, since I was at one point reprimanded by someone for holding a camera, but I took some photos during the course of the Latin mass and marriage ceremony (both were sort of mixed and I wasn’t completely sure which was which all the time). Emily’s parents, excellent Catholics and highly traditional, were doing it, so I figured it was probably alright.

Once we were out of the church again, I felt more comfortable taking photos of everything. We assembled around the exit and grabbed handfuls of dried rose petals to throw at the happy couple when they had finished with a few photographs or whatever it was they were doing.

Then we gathered ourselves up to take the bus back to Barabrow, where the reception would take place. 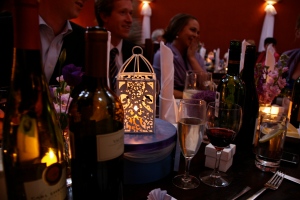 There was some champagne, and then we settled in for a four-course meal. I think there were about nine bottles of wine at our table. The place was lit almost entirely by candles, which was lovely, but apparently not altogether safe. A table nearby almost set the place on fire twice, once when someone tried to lean a camera bag against a flame, and another time when a napkin went alight. Both times, the offending objects were drowned in someone’s water glass. After dinner, we danced to traditional Irish music, forming lines and switching partners as we were instructed. At around 12:30, I was so tired I went and took a nap, setting my alarm for 2. I got up and went to the after-party, two doors down from my room, where Thomas and Emily were singing and drinking Irish whiskey with a small group that had not gone to bed yet. They left around 3, and we kept singing, our arms around each other, swaying back and forth in time with the acoustic guitar.

2 thoughts on “The whole purpose of my visit”