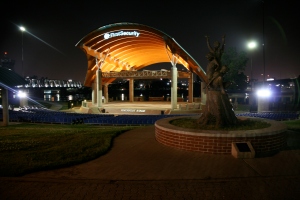 We’re at a dog sled camp two miles above sea level, in Leadville, Colorado, the highest city in the United States, not far from the headwaters of the Arkansas river. We passed over the river’s massive width in Little Rock, and stopped to snap a photo of its refurbished Riverfront Park where Collin used to play punk shows in high school by plugging into the unguarded sound system. Now we cross it again where it is little more than a stream.

speaking, and trying to convince us to adopt it.

“If they’re good, if they have the right parents and everything, you don’t need to train them. You hook them up and they just run. You train them to be polite and stuff, you know.”

He’s pointing out his personal team among the plethora of teams he’s taking care of. Wicked, who he’s had for a long time, has done the Iditerod and the Yukon Quest. “The Quest is harder,” says Ritchie.

We go for a little trek to a frozen lake and see some of Leadville. That evening, I start feeling a bit panicky for no real reason. I sleep, and wake up in the middle of the night thinking: it’s probably the elevation. Ritchie has told us that just lying around, your body works as hard as if you’ve been distance running at sea level. He’s lost about 20 pounds just being this high up, he says. It happens to everyone in town: they’re all skinny and weathered. 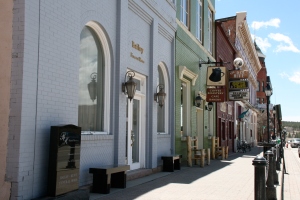 The next morning, I definitely have elevation sickness or something. I’m not hungry; I’m dizzy and incredibly tired. I drag myself around Leadville behind Collin, who is spry and charged, and snap a few photos of the old buildings in the thin, bright air, colder by far than anyplace we’ve been on the trip yet. I tell Ritchie I don’t feel well. “You need to drink water,” he says “way more than normal. My girlfriend’s sister was up here and got so dehydrated she had to be hospitalized.”

I chug water and we head down a few thousand feet, following the river as it swells again past rafting companies newly open for spring to Cottonwood hot springs in Buena Vista, which turns out to be under construction. We pay the slightly-reduced fee and jump in anyway. We were supposed to go rafting, but it didn’t pan out, and honestly, the way I’m feeling, I’m not that up for it. I kick back in the hot springs and put my limited energy into trying not to get sunburned.

By the time we get west of the Continental divide, I’m feeling better.