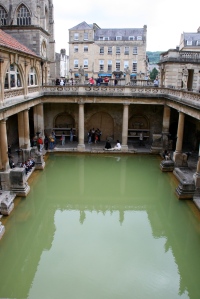 If you’ve read Jane Austin, you’re familiar with how trendy it was during the Georgian period for parties of people and particularly sickly women to take the ancient waters at Bath; something that generally turned into a social/tourist outing in which young people would happily subject themselves to a variety of entertainment. Not entirely unlike Bath currently; tourists still flock, and many treat themselves to a spa day or two. Not in the Roman Baths themselves, mind you, although you can have a drink of warm water flavored with minerals from the fountain there.

These Roman baths are supposed to be some of the best-preserved anywhere, which according to the probably inexpert opinion of a local tour guide is due largely to the fact that they were buried under layers of mud for many centuries and thus were kept from marauding Anglo-Saxons, Norman conquerors and peasant farmers looking for stone to quarry. The Romans built on the site sacred to Sulis, a Celtic goddess that they combined syncretistically with Minerva. Before the Romans, the waters at Bath were said to have miraculously cured a Celtic king and his pigs of leprosy.

The modern city of Bath is a world heritage site and as such has to follow strict building codes to enforce the uniform look of the city. Local limestone is used exclusively for the facades of buildings.

One thought on “Taking in Bath”