I arrive in Milan on a gray and sopping wet day, and am greeted in the baggage claim area by a bevy of tourist fliers, all of which appear to be for shopping. Haute couture shopping, fine leather goods, discount malls in nearby Switzerland. The fliers and the weather are so discouraging, in fact, that taking a nap in the airport to catch up on the sleep I didn’t get on the plane seems like the best option for the morning, so I find a not-horrible spot and pop my silicone earplugs in. Several hours later, after wiping the drool from my chin, I make my way into the city to meet up with my couchsurfing host at the prearranged time, on a particular set of stairs at a particular metro stop.

We’re going climbing at the least-expensive place in Milan, Passagio Obbligato, an old-school bouldering gym packed with people who seem pretty serious about it. My host climbs longer than I do, so I take a break and attempt to read the Italian-language climbing magazines. I’m flipping through Pareti when I see a headline that includes the word Spokane. This makes me laugh, so there in Italy, I try to piece together what they’re saying about the climbing in my area back home. I think it’s good?

The next day, all I really need to do is make it to my 3 o’clock appointment to see Leonardo Da Vinci’s mural of The Last Supper. I purchased a ticket a month in advance for 8 euros online, having discovered that this was imperative if you actually wanted to see it — pro tip: check out the official link and select the date and time you want; other sites will likely charge you more.

I’m packed up and planning on leaving my bag at Cadorna, the nearby train station, but as it turns out, they have no lockers (pro tip: they do have lockers at the Centrale station), so I end up wheeling my little suitcase through the rain to the church, over the cobblestones. I purchase a 5-euro umbrella from a street vendor, since I have brought no rain gear, and I have my luggage in one hand and the umbrella in the other. Due to how lightly I packed, this is not as horrible as it sounds. I try to think of it as forearm training for rock climbing.

Once I’m inside the inner sanctum that is the Cinacola Vinciano, I park my bags in a corner and stare at The Last Supper for 15 minutes in near-total silence. They let a handful of people in for a quarter of an hour at a time, and the result is quite good. Reverent, even. 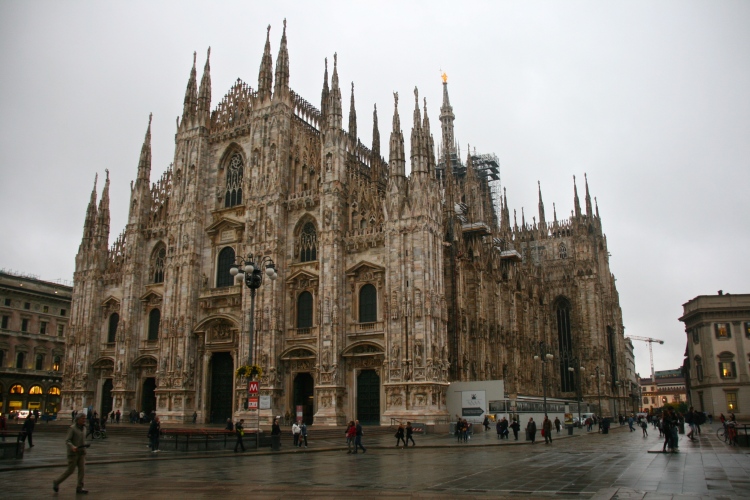 Then I walk to the Duomo, still hauling my suitcase, picking my way through the warren of small streets with the aid of my paper map, which is going limp in the drizzle. Then, worn out, I take the metro two stops to Crocetta and find Palo Alto, where I’ve been told there is an English conversation group that meets at 8 pm on Wednesdays. Apparently, it’s centered around the aperetivo common to Milan, where you buy a drink and get small plates of food for free. It’s only 5 euros — quite a bargain, because the food is not at all bad. Neither is the conversation. In short order, I meet an Italian with a near-perfect American accent who tells me he does Civil War reenactments with a small group here in Italy, which I have never even heard of. He prefers playing the South because the costumes are cheaper. He’s also done some WWII reenactment in Russia, apparently. I meet an Indian from Zurich who tells me how much he loves his job driving a pedicab: “It’s effortless, it flows like a river.” He says he takes it upon himself to make everyone he carts around feel special and connected, and he knows just how to do it. “Usually it’s music and alcohol,” he says. “People are simple.”

I meet Spanish women from Valencia and an Irishman who is busy correcting the near-perfect-American-accent guy’s English by telling him you shouldn’t say “typing on the computer,” because that means “typo.” I say nah, you can say that. The American-accent guy rebuffs the Irishman with “You are boring!” and everyone around him cheers.

2 thoughts on “Milan in the rain, on the cheap”