Sex figures prominently into many of the narratives where the CREC has spectacularly failed.

And I don’t think the CREC will fix this problem until it fixes its perceptions of sex. So the denomination as a whole and the individuals within it need to re-examine several crucial sexual issues, and go from there.

First, the CREC needs to publicly recognize that being sexually abused is not in any way, shape or form a sin. The responsibility of sexual abuse lies on one person, and on one person alone: the person doing the abusing. It doesn’t lie on the victim’s family, it doesn’t lie on the victims. So what if in theory, in some alternate universe, the victim or the victim’s family could have stopped the abuse before it happened? That doesn’t mean it’s their fault that they didn’t predict the future sufficiently to do so. Being naïve is not a sin. Being small enough to overpower, either emotionally or physically, is not a sin.

Second, the CREC needs to publicly recognize that the fix for sexual abuse is not marriage. That just pawns an abusive (or, at best, highly likely to be abusive) person off on someone else. Is it possible for someone to deal with their abusive nature sufficiently that they stop being abusive? Yes, it is possible. But it’s not that likely. As Eric Holmberg says, “it is a miracle akin to the raising of the dead.” And verbally “repenting” is about as indicative of real change as putting on a new church suit. We’ve seen this in the Wight case, and we’re in the process (if you’re following the court developments, which are sobering) of seeing this in the Sitler case as well.

Third, the CREC needs to recognize that there is no shame in having been a victim of sexual abuse. There is no shame in saying “I was abused.” Indeed, many who are standing up to say this now are joyful people who have become stronger for the adversity they faced, although they left the church because the church was no help to them. They say “I was abused” not to revel in self-pity, but to demand that cultures enabling abuse change. They do not want to see this happen to other people.

R.L. Stollar has a good post up where he refers to Madeleine L’Engle’s phenomenon of “naming” in the face of annihilation. And this is very pertinent to victims of abuse, who may begin questioning their identity, their power, their sanity, especially when they’re told over and over “no, your wound has already healed, and you bringing it up means that you’re bitter, that you’re sinning.” Trust me, if wounds have healed, the ones who have been wounded won’t be showing you a bleeding cut. An apology, like the one Peter Leithart so poignantly offered, goes a long, long way to “naming” the victims of abuse, goes a long way towards saving them from annihilation and the X-ing out of their essential selves, or at least where you and the church are concerned. It tells them: you were right. Within our church, your voice should have mattered more. The voice of your destroyer should not have been the one we listened to. That was wrong of us. You were hurt, but you still matter. You were plunged into a world of shame, but now I want to publicly call you what you are: blessed, whole, sane. You were correct that something terrible was done to you.

Doug Wilson’s staunch refusal to understand this is puzzling, frankly. Especially when he couples it with mockery of anyone who tries to call him out on it — a recent blog post asserts “David gave occasion for the enemies of God to blaspheme, but he also knew that the reason they wanted to blaspheme so much was because of his righteousness.” This is just bizarre, given that many of the people calling for Doug Wilson’s repentance are very clearly kind people who are not Doug’s enemies and would even agree with him on most points about “righteousness.” Not to mention, his enemies notwithstanding, David publicly repented. The Pslams are full of David’s repentance, not David yelling “Shuddup, you guys, it’s none of your beeswax that I used my political power to do bad things!” Or maybe I’m missing that passage where he says, “all night long I water my couch with contrite weeping because my righteousness makes my enemies attack me.”

This is all the more true when it is glaringly obvious that Doug Wilson made a host of mistakes in both the Sitler and the Wight situations. The most serious of which, at least from all the proof that I’ve seen, is that he actively encouraged the Greenfields not to take the abuse case to trial, and threatened to withhold communion if they did. I understand why Doug Wilson wouldn’t be keen to apologize for this, since Christian attorneys have called it potential obstruction of justice. But all the more reason for him to be humble and transparent, if he’s a leader worth his salt. 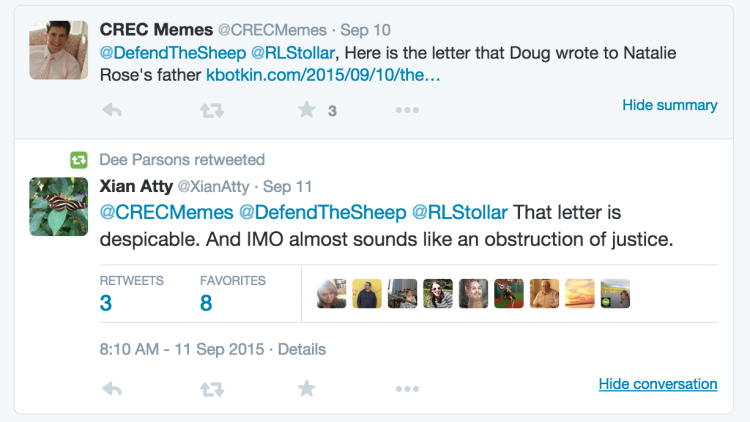 Fourth, the CREC needs a broader idea of gender roles. Now, there are many happy marriages within the CREC, but in my observation, these happen where both parties came into the marriage as more or less understanding, developed, compassionate people — meaning nobody is taking the CREC’s teachings on headship and submission all that far. But this is a serious potential issue where men are tempted to be domineering jerks, and women are tempted to be mousy individuals afraid to express their opinions about anything. And you know, I’m willing to accept that certain CREC pastors don’t even intend for their teachings to come across as black-and-white as they do. However, they need to realize how they are coming across, at least for some individuals, and that in fact these types of individuals will be attracted to churches and organizations that give them a free pass on domineering, control-freak behavior. One woman writes about being engaged to a man who went on to become a CREC deacon, and this man was so obsessed with headship that he was furious when she publicly suggested changing the kind of toilet paper they used.

As another friend of mine stated, “one of my great regrets in life is how I treated my wife when we were first married. Marriage is incredibly difficult, and we had several complicating issues that made it harder than usual, but I fell back on being an angry, controlling, dictatorial spouse.

“As a male, I reverted to the version of theology that gave me the illusion of control in a situation that made me feel powerless. It was comforting to think that there were elders that I could call on to fix my wife, and deal with the problems that I couldn’t.

“It took several years and lots of horrible things happening to us for me to understand how badly I’d behaved. We had a string of really awful Christian counselors who usually made things worse. It really wasn’t until I’d been run over roughshod by my own elders and by our Greyfriar pastor that I started to understand what I’d done to my wife.

“It isn’t the CREC’s fault that I was the way that I was, and it wasn’t the fault of the church that I attended, it was my fault. When I was struggling, though, the advice that I received came from a theology that, at its core, holds women as inferior to men in any arena that matters, and that validated any natural machoistic arrogance that I had.”

Fifth, the CREC needs a broader understanding of sexuality itself. Sexuality isn’t just about men-dominate, women-submit. There is a kernel of truth to this, and that is that sexuality between men and women is polar, that the ebb and flow of it is equal, but not equally expressed; men and women “fall asleep briefly in moments of quiet, tight-pressed together, and wake again, begin again, asymmetric equals in the slanting light of afternoon.” This polarity is about being “spirit, elemental, dissolving into the pull of another soul.” But within this polarity, feminine sexuality is as strong as, if not stronger than, masculine sexuality. Even near-lifetime-bachelor C.S. Lewis writes that “The beauty of the female is the root of joy to the female as well as to the male, and it is no accident that the goddess of Love is older and stronger than the god.” And, frankly, this is far more expansive and broad than anything I’ve ever heard of coming out of the CREC leadership about sex. Now, it is true that there are people within the CREC who are into celebrating female sexuality instead of dictating it, but these are typically the kinds of people who are borderline rebels within the community; the kind who, despite official teachings to the contrary, wear nose rings and believe that depression is a real thing (not just a sin).

What should the upshot of all this be? One suggestion by my friend was, “I want the CREC and Moscow in particular to radically alter how they teach about gender relations, I want them to radically alter what they teach about authority and its administration, and I want Doug Wilson to step down — as a symbol that the era of serrated misogyny is over so that others will have a better chance of doing the right thing in their lives in the future.” Should Doug actually step down? It’s kind of a moot point, because we all know he never would.

9 thoughts on “The CREC and sex”