We’re taking a taxi collectivo to Trinidad. We start out eight passengers crammed into a three-row taxi, me squashed in the back next to a large man at the driver’s request. The driver keeps texting someone as we hurtle down the mostly-empty highway, and I study the sticker he has plastered above his rearview mirror: A Calvin-knockoff comic-book boy flashing the bird and grabbing a tall girl wearing nothing but a thong, with the caption ALANTE NO MONTO VIEJAS. I fake-translate this in my head as “No old women allowed on board,” although I discover later after looking the words up that it would be more accurately “No old women allowed to ride in the front seat.” Either way, it’s charming. I suppose this is why Castro hated pop culture.

We ride two hours and then get shuffled into another “taxi” with eight more people. The driver tries to tell me to get into the back row with four other women because I’m skinny, but I refuse. I’m tired of being squeezed into corners. I take a super-plush hard plastic seat next to the equally small hard plastic seat my boyfriend is sitting in. We quickly discover that the van has no suspension, no vent system, no insulation: $40 per person to rattle down the highway with baggage stuffed underfoot, for the remaining four-plus hours of the trip. Halfway there, we stop for a break and a German girl decides she’s also tired of being squeezed into corners. She takes a French guy’s seat, which offends the French guy. He and his wife begin discussing this highly abnormal and horrific turn of events, in French, while the German girl berates the driver in English: “Everybody needs a seat! There’s not enough seats for everyone! You must arrange something else!” A Portuguese girl translates this into Spanish for the driver, and then translates back his response: “He says it was arranged by the guys in Viñales, and he can’t do anything. He’s just the middle man.”

The German girl hunkers down into her book and her insisted-upon seat. “Assholes,” she mutters in response. Her boyfriend saves the day by making a seat out of a backpack and sitting on it himself.

Six hours into the ride, teeth clattering, Collin announces: “I’m dirty, I’m hot, I’m sweaty, I’m tired, I’m starving, and I have no shoes,” and I laugh, because the fact that he’s devoid of all footwear is really the icing on the cake of this misadventure.

When we arrive at our casa, it’s too late to buy shoes in Trinidad. I tell our host, an endearing old woman who chatters at me in Spanish like I can understand her, of Collin’s predicament. I have researched and memorized a couple of phrases for this occasion. The woman, who thinks Collin’s name is hilarious just to begin with, finds this wildly amusing, and enlists several neighbors to find a pair of flip-flops that he can borrow. Collin is fastidious about most things, but he has apparently come to terms with the realities of being barefoot in Cuba and is genuinely ecstatic to have a pair of too-big, well-worn secondhand sandals. We go to find dinner. We pass one place that I say looks nice, and Collin says it looks too fancy. But I convince him. It is not too fancy, it’s Trinidad, where everything is fancy, in stark opposition to the day’s ordeals. We sit on a rooftop terrace, just the two of us, with the full moon overhead, and eat three courses and drink pina coladas and some local honey-infused cocktail, all for less than $30. “This town is awesome,” we toast, standing up, because the hard plastic seats imprinted on us and there’s no way we can sit down more than is absolutely necessary. 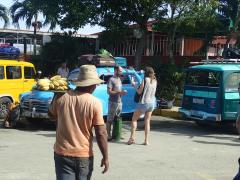 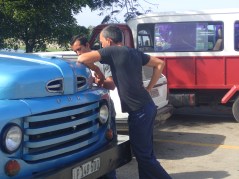