This week, the temperatures dropped to below zero, freezing moving water and making ice climbing possible. I’d never been before, for a few different reasons — with the chill factor being topmost. But a few friends were heading out to Copper Creek Falls, only a few miles from where my parents live, and the elements had conspired to make things as pleasant as possible. The mercury was rising, the sun was out, and the set-up had minimal danger and effort involved. Plus there was going to be a fire.

I am not normally a morning person, but I got up at 6:30 and found that I felt bizarrely excited to be making the trek north in the searingly bright sunlight. Perhaps it was the familiarity of the drive, of the scenery, the feel of homeward-boundness. I met up with my friends and we carpooled to the Canadian border, or just short of it. We hiked in to a small, shady enclave of rock and cascading ice formations. They set up a top rope and then it was my turn. I had heard horror stories of the “screamy pukies,” wherein ice climbers’ hands get so cold that re-thawing them induces extreme pain to the point of vomiting. So I stuffed hand warmers into a special slot in my mittens and cinched them up to make sure they didn’t fall off.

As it turned out, I had over-dressed for the climb itself, and my two hats kept sliding down into my eyes underneath my helmet. My two coats felt a bit unwieldy, though not as unwieldy as the sharp metal weighing off me in every direction. I was trying to climb the ice as I would a rock face, roughly speaking, with some rather delicate footwork, using the features that were already in the ice. However, ice climbing tends to lend itself to “thuggery,” according to my male climbing partners. In other words, bashing holds wherever you want them. But, you know, then you break all the best features.

Now, the waterfall was not completely frozen. Under the layers of ice, it gurgled and flashed by, visible and audible. To be climbing a roaring, vertical stream of water in any form felt immeasurably odd. Parts of the ice dripped. By the time I had made it the 200 feet to the top, I was pretty well worked. So I sat by the fire in the sun, watching the top layer of the ice I stood on become slick with relative warmth. As the sun began to pierce the canyon we were in, we finished and packed up. 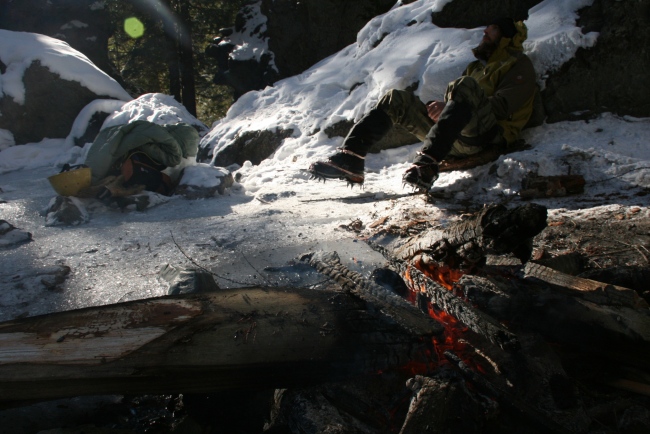