I went out to find an ATM, leaving behind my camera because ATMs are hardly film-worthy. On my way a Chinese guy flagged me down and asked me to take a photo of him and a smiling Chinese girl in front of a Chinese sign that apparently was film-worthy. I snapped the photo, handed back the phone, and they started chatting with me: Where was I from? How long was I staying? They said they were from the provinces, from somewhere in the North which was known for its ice-sculpting festival, and were on their way to a tea ceremony. I said, oh, I love tea, and so they invited me along, saying they would practice their English.

They talked incessantly and excitedly, and I understood some of it. They were apparently impressed that I was not fat, being from the United States and all. They were shocked that I was 33, since Americans are usually so aged and saggy. “What kind of cosmetic you use?” the girl wanted to know. Oil, I told her. She looked confused: the all-natural scene apparently hadn’t made it to China yet, and “oil” probably sounded like something peasants used.

We got to the teahouse, a nondescript door painted with something in Chinese. We ducked in and sat down in front of a man dressed in a traditional Chinese get-up, complete with the long braid of hair. He stood behind a line of teas in glass jars and seven small teapots on a red laquer base emblazoned with a dragon. Teas from the mountains, they told me. The first was ginseng, pungent with a sweet aftertaste. Our host poured it into tiny bowls the size of sake glasses and told us to hold it with three fingers, drink it in three sips. Next was jasmine, clear and fragrant. Then some sort of mixed-dried-fruit tea, deep red and sweet. There was a special flower tea that came apart into a bouquet when prodded. We had green tea, lychee tea, and last of all an aged tea that was supposed to be prized in China. 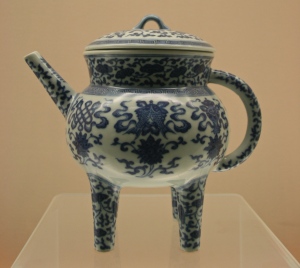 My new friends translated everything the host said, pestering me with questions in between. I was doing the mental calculations, trying to figure out if I had enough cash on me to pay for this. I’d had only a few thimblefuls of tea — 14 to be exact, two of each kind of tea — but the “ceremony” part (and what art thou, thou idle ceremony?) would likely hike the price up some. Given that I’d been buying meals for less than $1, I hoped it wouldn’t be too bad.

The bill came, and my third was over $100. Fortunately, the tea house accepted credit cards. “One life, one life,” said my new friend in consolation. We walked back to the subway and parted ways; they promised to email me.